Click to see a timeline of the park's development.

The Foundation Park Conservancy was created in 2009 by Mount Vernon Mayor Richard K. Mavis to develop and execute a master plan for what was then known as Foundation Park. Initially an 85-acre park encompassing two lakes and river frontage, acquired by the City of Mount Vernon in 2000 with a grant from the Knox County Foundation, it was expanded to 125-acres with the assistance of a 2006 Clean Ohio Grant.

The fortuitous location of Foundation Park, adjacent to the Ohio to Erie Trail system, the scenic Kokosing River, and historic Downtown Mount Vernon, encouraged the Conservancy board members to set the bar high for this unique recreational and economic development opportunity.

As the Conservancy’s involvement in Foundation Park grew, so did Foundation Park itself. Major funding from The Ariel Foundation not only advanced the Conservancy’s planning mission, but also enabled the 2013 purchase of the 75-acre former Pittsburgh Plate Glassworks site. This acquisition, prompting the renaming of the entire area as “Ariel-Foundation Park” in honor of its two major benefactors, set the stage for creating a world-class recreational area.

Under the leadership of Ted Schnormeier, a vision and plan were set in motion for the completion of the park in time for a July 4, 2015, community-wide celebration. On this historic date, the expanded and enhanced park was presented to the City of Mount Vernon. A new challenge awaited the Conservancy following the grand opening as it transformed from a “fundraising and building” board to a “fund raising, programming, and development” board. As major stakeholders of Ariel-Foundation Park, the Community Foundation of Mount Vernon-Knox County, the City of Mount Vernon, and The Ariel Foundation were tasked with appointing and relaunching a smaller, re-purposed board of directors.

In its inaugural year following the opening of the park, The Foundation Park Conservancy undertook an ambitious program of physical enhancements to the park, as well as a schedule of free concerts in the 17,000 square foot Schnormeier Events Center. Thousands of guests visited the new park, some on a daily basis, to enjoy its three lakes, beautiful woods, walking trails, and historic industrial "ruins." Without a doubt, the spiraling Rastin Tower and Observation Deck established itself as the park's most iconic landmark.

To provide continuity and day-to-day support for building maintenance and operations of events, reservations, and fundraising, the Conservancy hired part-time personnel to fill the roles of operations, marketing and reservations.

While much has been accomplished in a relatively brief span of time, the Foundation Park Conservancy remains focused on making Ariel-Foundation Park both an everyday recreational resource for the 60,000 residents of Mount Vernon and Knox County and a destination for “seekers of the unique” from throughout Ohio and the Midwest. 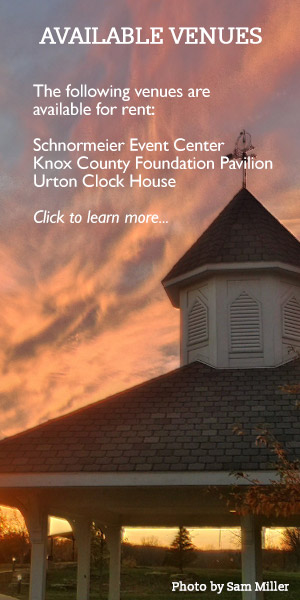